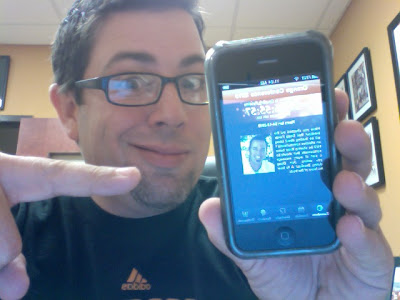 We are 8 days away from the Orange Conference! How did I know that? I opened my iPhone conference app! Did you hear that? I have a conference app for my phone. I am so proud of the Rethink Team for taking this jump and making an app for the conference. Just played around with it some and it has everything you need to stay up to date with the conference as you attend the conference because I know you are not going to miss this and I know you will get tickets today and find a hotel and I know you love this run on sentence that my English teacher can’t do anything about! Take that English teacher! Seriously, I hope you will go download the app and check it out for yourself. There is still room for you at the conference and we would love for you to join us for ORANGE 2010!

Just so you know…the Orange Conference is a experience that gathers children, preschool, and student leaders together to think about what ministry with parents and kids looks like TODAY. When we talk about thinking ORANGE we are just referring to the idea of the church (yell0w) and the home (red) working TOGETHER (orange!) Think about breaking away and joining us in Atlanta for the conference or just the preconference in 8 days…whatever fits your schedule, we hope to see you there.