Sometimes you just have to make a decision. Last night was an odd night at REMIX. We had storms all day, trees were knocked down, traffic lights out, TRAFFIC WAS CRAZY in Clarksville. I just made the call and we called off REMIX around 5:30. We text messaged, emailed, and called people to spread the word and it worked for the most part. I know some of you do not call anything off for anything but when you have teens driving in for an event during the week sometimes you just have to think like a parent and not a youth pastor. Would I want Kozbi when she is 16 out driving around with the conditions. The answer was no, that helped me make the call. We also would have had at most half of the teens there we usually have. I hate for that many people to miss a week of this series. Sometimes you just have to go with your gut feeling and make the call. I hate to mess the flow up of our weekly youth environment but I had a bad feeling when it took some of band over and hour to get to our venue to band practice. Seeing the wind do this to my kids trampoline that morning also helped me…yes, it bent the frame and tossed it in another yard! 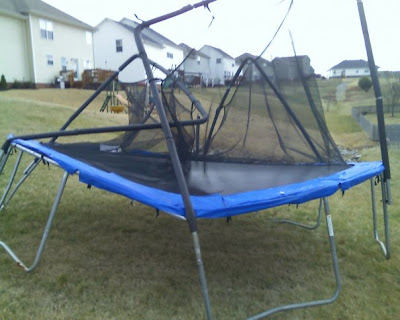