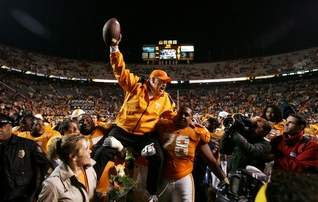 No bowl game this year for Tennessee but finishing 5-7 and beating Vandy and Kentucky is enough for me. What a great way to end the year. I have been one of the guys asking for change at UT this year. I am excited about the hiring of a young new coach to lead the Vol nation. Coach Fulmer was once a young assistant coach with no head coaching experience on the college level and that tuned out great. It will be fun to see what Lane Kiffin will bring to UT and at least we will not be running the SPREAD, I may be the only person in America that is already tired of it.
I have been watching Coach Fulmer lead Tennessee since I was 15 years old. I was thrilled when he took the job from Johnny Majors and he did what he said he would do . Coach Fulmer took Tennessee to the next level. I just want to say thanks. I watched his last game and was once again blown away by the class act that is Phil Fulmer. Just a few things I took from watching Coach Fulmer lead UT…

Thanks Coach Fulmer! It has been a fun 17 years. Thanks for all you did for the University of Tennessee.